What is “Affordable Housing”? (Part 2)

We understand how the issue of housing affects our members and their businesses, and are committed to keeping you informed as we work towards tackling the issue. At last week's Public Policy meeting, we were joined by Housing Next Executive Director, Ryan Kilpatrick. He gave us an update on the work being done to address the issue of housing inventory at all levels of investment, including the public policy challenges related to zoning, the skilled trades talent shortage that comes into play, and the rising costs of construction. This week, we're sharing the Housing Next blog post that gives an in depth look at the housing issue, the work being done to increase inventory and the plans to make quality housing accessible to all members of our community.

We're also invite you to join us for a Community Update on Affordable Housing on Tuesday, June 4 at 7:30am at the Ottawa County Filmore Street Complex. Click here for more details and to register for this free event.

What is Affordable Housing? (Part 2) 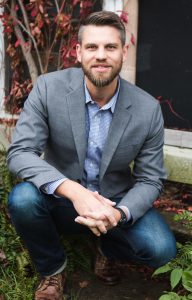 In our last blog post, we talked about the fact that 'affordable' is a relative term. Whether or not a particular house or apartment is affordable, depends entirely upon the income of the renter or owner. No matter what your income is, if you're spending more than 30% of your monthly gross income on rent or mortgage payments (including taxes, utilities and other housing related expenses), you're probably paying more than you can afford.

Last month's post also primarily focused on market-based solutions to creating more housing choice and affordability. However, as was clear in our Housing Needs Assessment, we also need a significant amount of additional housing at price points that will be below what the market can produce without some form of subsidy. Single adults earning less than $13 per hour or families of four earning less than $55,000 per year will likely continue to be priced out of the market even if we are able to completely align local regulatory structures with what the market demands.

Unfortunately, there is still quite a bit of stigma attached to the kind of affordable housing that is financed for those households earning less than half of the median income. Too often, we associate a particular type of housing with a particular class of people - and make a series of mistakes about how we judge what belongs in any given neighborhood. In this post, we'll explore some of the history that brought so much stigma to the term 'affordable housing' and how many of today's best practices in community development have been designed to avoid the mistakes of the past. 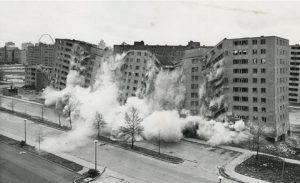 The above image (Pruitt-Igoe in St. Louis MS) was the poster child for failed public housing projects of the 1950s and 60s. It is still the mental image many people have when they hear the phrase affordable housing.

Most of the time, when we talk about anything that we might have a direct experience with, we bring all of our memories, beliefs and prior experiences to that conversation - whether we intend to or not. Since we all have some level of experience with housing of some sort, we are all bringing a different set of assumptions to the table when we talk about it. Even our most vocal advocates for more affordable housing often resist proposals for that very thing when the development is proposed too close to their own home. Largely, this is because we have all seen low-income housing developments that were not well executed in one way or another.

The above image (Pruitt-Igoe in St. Louis MS) was the poster child for failed public housing projects of the 1950s and 60s. It is still the mental image many people have when they hear the phrase affordable housing.

In the era immediately following WWII, the geography of the Middle Class in America shifted dramatically. In response to the G.I. Bill, desegregation of schools, and major federal investments in highways, the U.S. experienced a great migration of wealth out of our cities and into the surrounding suburbs. Very often, entire neighborhoods were demolished using eminent domain to make room for limited access highways designed to funnel workers from their new homes in the suburbs to their place of employment and back. Those demolished neighborhoods in the path of the highways tended to be poor and non-white. 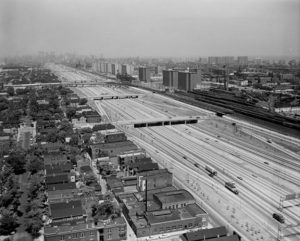 The federal government took on some responsibility for replacement of the housing that was demolished in the process of building new highways, but that replacement housing was not built in a pattern of traditional neighborhoods that offered housing at a variety of price points or easy access to local grocery stores, schools and job opportunities. Instead, the replacement housing was very often located in isolated pockets of the community where there were very few opportunities for jobs, commerce and quality educational opportunities. That isolation made it exceedingly difficult for many families to get to work, and when they could work, there were structural disincentives in place for those workers to advance in the workplace.

To make matters worse, these types of housing projects were often built with hundreds of units at a time and in monotonous sequences of identical buildings. This only served to compound and reinforce the negative consequences of spatial isolation for a certain class of people.

The Dan-Ryan expressway on the south side of Chicago required demolition of dozens of blocks of housing in a historically African-American neighborhood. The consequences are still playing out today. 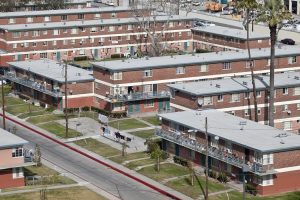 This model of housing did not serve as a mechanism to lift families up and out of poverty. Instead, it often created a vicious cycle of poverty that was perpetuated from one generation to the next.

There is Another Way

The old public housing model failed a lot of people and it failed for a lot of reasons. It did not fail because offering housing that people could actually afford was a bad idea. It failed because the physical design was poorly thought through and did not connect residents to economic opportunities or social advancement. The construction of public housing in the middle of the 20th century was executed in a way that ignored almost everything we know about how humans and local economies thrive - it lacked diversity and it lacked opportunity for individual growth and mobility. 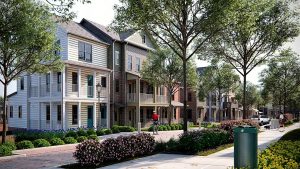 Over the last decade, we have seen a dramatic increase in urban investment across North America. This has provided much more opportunity for people of all ages to live closer to where they work and gain the ability to move around their communities without the need to own a car. However, new construction is inherently expensive. This means that the vast majority of new housing being developed in urban areas is also expensive. And yet, some traditional market-rate developers are finding value in partnering with affordable housing developers to help create more diverse, mixed-income neighborhoods.

The images above include the new Bridge Street Market and a 116 unit, market-rate development (left) on the west side of Grand Rapids, led by Rockford Construction (rents range from $900 to $3,400 per month). This project also includes a 64 unit affordable housing project (right), led by ICCF of Grand Rapids (rents will range from $375 to $1000 per month). These two projects combined will result in the transformation of a full city block where all of the new housing is within close proximity to transit, a wide range of job opportunities, multiple public and private schools and a grocery store.

The project described above is a fairly dramatic departure from the traditional mental models many of us have when we think about what affordable housing looks like, where it should be located and how it might interact with the rest of the community. It is also a fairly complicated investment structure for the lead developer. Our current models for financing this type of project are not exactly streamlined for maximum efficiency. And yet, Rockford Construction and ICCF made it happen despite those challenges and with significant support from the City of Grand Rapids, the Michigan State Housing & Development Authority and the Michigan Economic Development Corporation.

It's important to be very clear about the fact that mixed-income and below market-rate housing does not occur by itself in most communities. This is because we have a combination of regulatory and market barriers in the way of creating new housing that is affordable to those earning less than average incomes. It is incumbent upon local public officials and staff to help clear out some of the regulatory obstacles in the way of more housing but also for those officials to ask the private development community to partner with them in order to create a broader range of housing choices and price points.

In the next post, we'll explore some specific tools that local units of government can use to allow for and encourage more housing choice in the market. We'll also dive into some mechanisms for partnering with the development community to fully understand where the market barriers are hidden.